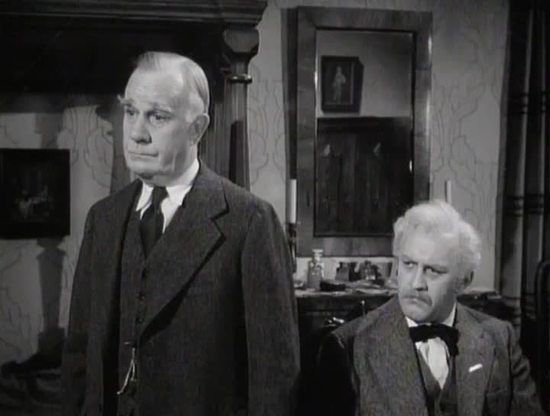 "The Grapes of Wrath" is a true rarity: a book universally touted as Great Literature that's actually a genuinely good read -- unlike others I could name; see Joyce, James -- that was subsequently turned into movie so fine, it's arguably as iconic as the novel itself.

For his followup to "Grapes," John Steinbeck chose to pen a contemporaneous piece of fiction about the German occupation of a small Norwegian mining town. Though the author was more circumspect, referring to them as the townspeople and "the invaders."

Sensing another big hit, and with the advent of World War II creating a voracious appetite for films with a propagandist bent, the studio again paired Steinbeck with his "Grapes" screenwriter/producer partner, Nunnally Johnson, with whom he had become close friends.

Steinbeck reportedly gave Johnson free reign to tinker with the novel, which he wrote with the intention of adapting it into a stage play, hitting Broadway in 1942. I haven't read the book, but from what I gather Johnson did not take his friend's permission to heart, sticking quite faithfully to the text.

The result is probably the least-remembered film adaptation of a Steinbeck work. Though he ended up receiving the highest civilian award from the Norwegian king as thanks after the war, "The Moon Is Down" is a rather staid, self-serious movie that aims a little too obviously to demonstrate the nobility of "small men" in the face of Nazi oppression.

It features a trio of fine character actors -- Lee J. Cobb, Cedrick Hardwicke and Henry Travers, forever the angel Clarence from "It's a Wonderful Life."

But the film suffers from having no main character or strong narrative through-line. The Germans take over the town with ease, a quiet war of wills begins between the conquerors and the conquered, and the heavy hand of the Nazi regime soon stokes the embers of resentment into an outright blaze of revolt.

The title, incidentally, is from an obscure line in Macbeth that portends imminent violence.

Travers plays Orden, the mayor of the (never named) village. A simple, soft-spoken man, Orden is prepared to accept the German occupation with grace and deference. As he repeatedly says, he's a little man, and not a particularly brave one, the elected head of a little town. But he has strong beliefs that no people can ever be truly defeated if they keep their sense of independent freedom in their hearts.

Hardwicke is Col. Lanser, the German officer placed in charge of the town. In the opening scene we see him receiving his orders from a general, and seems positively bored about the prospect of his new assignment, so far away from the front. His job is simple: keep the people down, and extract every ounce of iron from the nearby mine as he can.

Lanser is not a classic screen villain: he's intelligent and prefers to rule via decree rather than violence. But he's not afraid to kill innocent men as an example to others, taking hostages and then executing them publicly when there are acts of sabotage or resistance. Of course, this only spurs more reprisals, as Orden had predicted to him.

Cobb, as I've previously mentioned, is an actor remembered for a long line of older, often angry men, most notably in... well, "12 Angry Men." But he was usually much younger than the characters he portrayed. Here playing Albert Winter, the elderly town doctor, Cobb was barely into his 30s, but quite convincing in a silver hairpiece and subtle aging makeup.

Winter attempts to be the conciliatory force working between the mayor and German colonel, but it does not turn out very well, as we might expect.

The movie is at its best when the three primary actors are bouncing off each other. There's a powerful scene toward the end where, after being condemned to execution, Orden recalls a speech he made in high school, reciting Socrates' Denunciation. It's the strident call of a man about to die, eloquently spitting his defiance at his murderers.

Lanser wanders in during the speech, recognizes both its source and the context in which it is being recalled, and even assists Orden with a word he's forgotten. We find ourselves liking all three men, if for different reasons.

The real bad guy is E.J. Ballantine as George Corell, the traitor who helped prepare the town for invasion. It's a little unclear what this consisted of, other than providing intelligence about the general layout and the presence of a tiny 12-man militia comprised of local men. As if they could have stood up to the Germans' 250 crack troops, even without them being tipped off.

Orden refuses to have anything to do with Corell, unable to grasp how a native-born Norwegian could betray his own people. Lanser also doesn't take a particular like to the spy, making light of the small injuries Corell keeps turning up with at the hands of the perturbed villagers. Lanser refuses Corell's insistence that he be installed as mayor, but later is overruled when the traitor travels to Berlin to complain, returning with orders for harsher tactics.

(The notion that the Third Reich would side with a foreigner over its own high-ranking German officer is highly suspect.)

Hardwicke gets plenty of screen time, but Travers and Cobb disappear for long stretches involving other townsfolk and doings, which don't carry much emotional heft. The biggest one involves a sequence with Molly Morden (Dorris Bowdon), the widow of one of the murdered local militiaman, and a young German lieutenant, Tonder (Peter van Eyck).

Tonder wanders into the local pub one night, desperately bored and lonely, and is hurt when all the local men depart -- staying only the requisite 15 minutes he orders them to. Later he has a near-crackup in front of other officers, even going so far as to suppose that Hitler is crazy. He then winds up on the doorstep of Molly, pitching woo.

It's implied that she summons him to her bedroom and then murders him with a large pair of knitting shears. But the act is never commented upon further, other thana  vague reference to Molly having made it safely over the border. You'd think the murder of a German officer would be a pivotal event in the narrative, but it's completely brushed under the rug.

This very short, doomed romance winds up being all buildup and no payoff.

A couple of asides about the pair of actors. Despite supposedly being a callow youth, van Eyck was actually five months older than Cobb. Bowdon was another holdover from "Grapes," playing one of the Joad sisters. She was married to writer/producer Nunnally Johnson, perhaps suggesting why such a dead-end story thread is allowed to spool out so long. Bowdon had her first child after production, and willingly (or perhaps not) ended her acting career at age 29.

Another sequence that holds some early traction is the delivery of individual sticks of dynamite -- along with a chocolate bar -- from the Royal Air Force, dropped in with little parachutes and accompany suggestions about how to use them to foil the Germans. Soon train tracks, supply dumps and even the mine itself are beset by explosions. Again, this aspect of the tale just sort of wanders off and is forgotten until the very end.

"The Moon Is Down" isn't a bad film, just a forgettable one. Perhaps it was having a journeyman director, Irving Pichel, at the helm instead of John Ford, one of the greats of cinema. But I don't think so.

The truth is Steinbeck's story just doesn't work very well on the screen. It's episodic and rambling, showing us interesting characters and then misplacing them, or presenting insipid characters who tarry much too long.

Great home-run hitters usually struck out a lot too, but people remember the titanic swats instead of the fanning. Steinbeck's percentage was very good, but nobody hits 1,000.