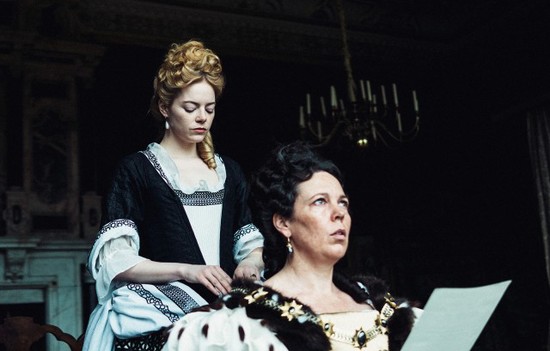 “The Favourite” is a roiling tale of deception, sex, twisted friendship and power. It reminds me a lot of “Dangerous Liaisons,” in that it contains all the ingredients of a classic romance but reduced down to a fetid brine of jealousy and loathing.

It is depressing, bitingly funny and insightful about the human condition.

The story (screenplay by Deborah Davis and Tony McNamara) is based on real palace intrigue in the court of Queen Anne of Great Britain during the early 1800s. Widowed, plagued by ill health from a young age, never a mother after 17 (!) failed pregnancies, Anne is masterfully played by Olivia Colman as a bitter, pathetic woman overwhelmed by the throne.

Her friend, Sarah Churchill, Duchess of Marlborough (Rachel Weisz), is for intents and purposes the real acting monarch. It was not uncommon in that time for women who could not officially hold a position within the British government to wield tremendous power as a “court favorite,” aka a close friend of royalty.

Sarah chides the queen like a wayward student and quietly degrades her, at point telling her her makeup makes her resemble a badger, while superficially acting as her closest friend and buttress. She acts as the queen’s go-between with ministers and generals, and since Anne is usually too sick or uninterested, Sarah really runs the show.

They even sometimes share a bed and… other forms of intimacy.

There has been some historical supposition about Anne having a lesbian relationship, but with Abigail Hill (Emma Stone), a fallen noblewoman who became her chambermaid and confidante. Most historians think it’s bunk. This fictional tale supposes even further along those lines, saying it was Sarah with whom she had a romantic relationship, which became a tense ménage a trois when Abigail entered the scene.

Abigail acts as the audience’s eyes and ears during the story, coming across as a timid young woman brought low by her family’s circumstances. She’s actually Sarah’s cousin, which is how she secures a job as a scullery maid. But Abigail has a sly cunning, and ingratiates herself with the queen by concocting a poultice to relieve her painful gout.

At first Sarah is glad for the help. Not having to kowtow to Anne’s daily whims and demands, caring for her pet rabbits or rubbing her various aching limbs, allows her to spend more time at court. She vies with Robert Harley (Nicholas Hoult), leader of the Tory opposition, about continuing their war with France and the tax increases necessary to do so. Decked out with poofy wig and pancake makeup, Hoult manages to be both comical and menacing.

But when Abigail extends her ingratiation as far as the queen’s bed, Sarah recognizes her as a threat and the women launch an all-out war of wills.

“The Favourite” is directed by Yorgos Lanthimos, an acclaimed filmmaker from Greece whose previous efforts (“The Lobster”) have failed to charm me like others. Perhaps because he’s not a screenwriter on this project, his weird, off-putting existentialist meanderings are kept largely in check. It’s more or a less a straight story, though he often uses a distorting fisheye lens to make the posh palace seem grotesque.

It’s also surprising, considering how dark the material is, how comedy often creeps in. Stone in particular has several scenes that she turns into a laugh with just a twist of her face or the way she delivers a line of dialogue. I especially liked her character’s relationship with Masham (Joe Alwyn), a court dandy who thinks he’s seducing her but actually becomes his plaything.

The film suffers from a classic example of the filmmakers not knowing how to end it, so they just stop the story at an arbitrary point. But the abrupt finale is more than made up for by three actresses giving knockout performances.