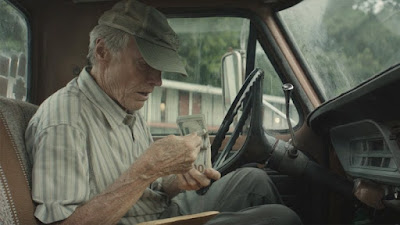 "The Mule" is a great idea for a movie that doesn't live up to its ambitions. Or rather, its ambitions aren't as lofty as they could be.

The latest from director/star Clint Eastwood has been a mystery to critics, at least those outside of New York/LA. The studio, Warner Bros., refused to screen it for regional film journalists. This is usually an indication the movie is a dog. But it's Clint Eastwood, for dang's sake, and he doesn't crank out very many clunkers, even at age 88. The total absence of "The Mule" from the awards race chatter has been mighty perplexing.

(One fine fellow I know suggests the studio is instead placing all its awards hopes on "A Star Is Born," which is probably a smart bet.)

Eastwood plays Earl Stone, an elderly horticulturist who gets caught up as a drug courier, or mule, for a Mexican cartel, transporting hundreds of kilos of cocaine at a time cross-country. He does this at first as a one-off for the money, as his farm has been foreclosed upon. Then he does it for more money, using it to replace his battered 1960s Ford pickup with a brand new black one, help pay for his granddaughter's wedding, fix up the local VFW clubhouse, etc.

But he keeps going, and going, and soon becomes the cartel's best mule. It becomes clear that Earl is doing this for more than just the cash. Maybe he just wants to feel valued again. Maybe he thinks if he spreads the cash around enough, his family will forget about what a lousy father and husband he's been.

Operating parallel to this story is that of Colin Bates, a hotshot DEA agent played by Bradley Cooper. He's chasing the legend of "Tata," this mule who transports more coke than any other, is utterly unpredictable and some say uncatchable. Of course, the secret to Earl's unpredictability is that he's an amiable old codger who likes to stop at the best eating joints, have a beer, hobnob with the locals, help a family change a flat tire, and whatnot.

It's fun and games for a while, but both story threads have the pressure ratcheted up. Earl sees the (by their standards) benevolent head of the cartel (Andy Garcia) replaced with some sterner types who insist on laying down the law.

At the same time, Bates is striking out in his months-long quest to nail Tata, and his boss (Laurence Fishburne) is getting ready to pull the plug. Bates and his partner (Michael Peñ) are putting in a lot of hours and time away from home, which places pressure on their family lives, in much the same way Earl did when he was a younger man.

"The Mule" is based on the true story of Leo Sharp, who was arrested in 2011. It's a much catchier name than Earl Stone, so I don't know why the filmmakers changed it. Nick Schenk wrote the screenplay based on a newspaper article by Sam Dolnick.

The first half of the film is almost a comedy, which turns towards tragedy in the second. Instead of driving by himself, Earl is shadowed by Mexican gangsters to make sure he stays on schedule. Of course, they stand out like a sore thumb in the places where Earl traipses.

"Two beaners in a bowlful of crackers," Earl jokes when his handlers ask him why all the white people are staring at them when they stop at a roadside BBQ joint. Earl is 90 and fought in World War II, and is past the point of being PC, or even knowing what PC is.

He also has encounters with a lesbian motorcycle gang, "Dykes on Bikes," and is corrected by an African-American family when he calls them "Negroes." These aren't contentious confrontations; Earl is friendly and his smiles are returned, his help accepted. It's almost like a fantasy safari for Trump voters.

It's an enjoyable movie, but I'm not sure what the point of it all is. Earl talks constantly about how young people need to put down their phones, eat some good food and enjoy life. This Earl does, including carrying on with young women when he stops at motels or is invited to a cartel party. He looks pretty good for 90, but I think the bundles of cash might have something to do with it.

Posted by Christopher Lloyd at 2:50 PM