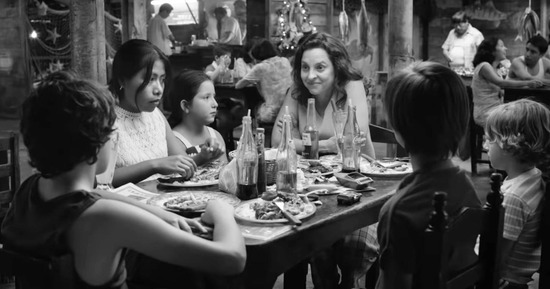 “Roma” is the sort of movie other filmmakers love, and audiences have to endure.

It’s a mesmerizingly beautiful film by writer/director Alfonso Cuarón, his first since “Gravity” five years ago. Shot in black-and-white and set in Mexico City during 1970-71, it’s a semi-autobiographical look at his childhood seen through the eyes of the family maid, Cleo (Yalitza Aparicio).

The cast is largely made up of non-actors, and the camera pans slowly around as if we were standing there witnessing the various familial activities play out, documentary-style.

Problem is, the quotidian doings of most families aren’t especially interesting, and neither is this one. The first half of the movie is a dreadful bore. Children fight, servants toil, the patriarch of the family, a physician named Antonio (Fernando Grediaga) leaves for an extended business trip and is barely seen again.

I appreciate Cuarón’s attempt to summon the spirit of his family life from nearly a half-century ago. But “Roma” plays out more like home movies that run on and on, seemingly without organization or end. The director, who edits his own movies and even won an Oscar for his work, seems too love in love with his own footage to carve out the fat.

The movie does finally gain some momentum in the last hour, when it becomes clear to the mother, Sofia (Marina de Tavira), that her husband is not coming back. The kids slowly wise up to the reality of their situation, and the normal sibling antagonisms get ratcheted up to a frightful level.

Cleo’s budding romance with Fermín (Jorge Antonio Guerrero), a rough sort from the other side of the tracks, takes an abrupt turn with a potentially life-changing development. Fermín is a devotee of martial arts, and I’m sure the most talked about scene will be his fully nude demonstration of his skills for Cleo using a hotel bathroom shower rod as a makeshift staff.

I’m puzzled as to what Cuarón hoped to accomplish with this scene. I think he intended it to be dramatic and even a little scary, but it plays more like a pornographic Bruce Lee spoof.

The family has four children, three boys and a girl, ranging from roughly age 6 for the youngest up to about 12. Only the oldest boy, Toño (Diego Cortina Autrey), is given anything like a distinct personality, as he continually rebels against his mother’s authority in his father’s absence. The other kids register as a sort of blur, horsing around in the background while Cleo is working, or making spoiled demands for ice cream or movie trips.

I’m not opposed to slow-moving movies. I nearly put “Ghost Story” in my top 10 list last year, and that contains a 10-minute scene of Rooney Mara doing nothing but eating pie.

But “Roma” has a self-indulgent listlessness that serves not to draw us in, but push us out. The experience of watching is a very pure form of cinema: observation without any sort of emotional intrusion.

Cleo is a cinematic construct for looking at the family, not a fleshed-out character unto herself. I believe Cuarón is trying to make some sort of statement about power dynamics, and how Cleo is essentially their beloved servant who’s almost a piece of property.

Trouble is, by not giving the character anything like an interior, he uses her just as badly as a filmmaker.