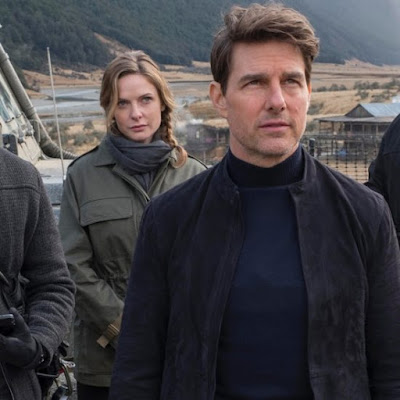 I enjoyed “Mission: Impossible -- Fallout,” as I’ve liked all the movies starring Tom Cruise as international superspy Ethan Hunt. The franchise has been going for 22 years now if you can believe it, though only six films total. It seems like anytime talk of “Is Tom Cruise’s star starting to fade?” pops up, he quickly runs back for another MI megahit.

“Fallout” is essentially a retread of the last one, again featuring the same villain: Solomon Lane (Sean Harris), a terrorist who wants world peace but thinks it can only be achieved by mass destruction and death. Ethan put him in jail in the last movie, but he manages to break out and start mayhem anew.

The new wrinkle is the White Widow (Vanessa Kirby), a famous philanthropist by day who is assisting Lane on the sly. There’s a suggestion of an attraction between Ethan and her, though I get the sense any coupling would be of the praying mantis variety. (Google it.)

The various sidekicks are back: Ving Rhames as Luther, munitions man extraordinaire; Simon Pegg as Benji, sort of a nerdy Q knockoff; Angela Bassett and Alec Baldwin as Washington politicians tut-tutting Ethan’s methods; and Rebecca Ferguson as Ilsa, a British agent who’s been both an ally and nuisance over the years.

Henry Cavill plays a new ally-slash-competitor, CIA wetboy Walker. He and Ethan have  a memorable two-against-one fight in a men’s bathroom against a little dude who’s more than a match for them. Of course, their own confrontation is telegraphed so much it feels inevitable.

“Mission: Impossible -- Fallout” is a perfect example of a popcorn movie. It tastes good going down, but it’s empty calories you soon forget.

Bonus features are quite good. These include three separate commentary tracks: one with director Christopher McQuarrie and Cruise, another with McQuarrie and editor Eddie Hamilton, and the third with composer Lorne Balfe.