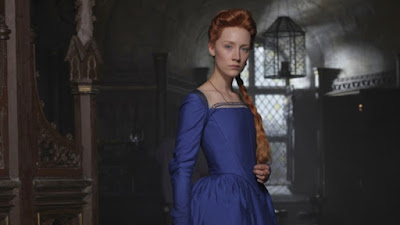 "Mary Queen of Scots" is a very good film when it focuses on its core dynamic, the relationship between the titular character and her rival/sometime ally, Queen Elizabeth of England. Saoirse Ronan and Margot Robbie are terrific as proto-feminist icons vying with each other from afar, sharing an almost spiritual connection through their letters and envoys, even though they don't physically meet until the end.

But the movie wanders away from itself, getting caught in a thicket of Scottish court intrigue and misplacing Elizabeth for an hour or so. In the rambling narrative of civil wars, deposing of the queen followed by the immediate deposing of her deposers, double- and triple-crosses, a parade of husbands, etc., the film stumbles into a narrative bog that it never finds its way out of.

The best reasons to see it are the performances of Ronan and Robbie. Done up in balloon-bottom dresses, makeup and architecturally impressive hairdos, this is a full-on Period Costume Drama with exquisite production values. The arch language can be a little hard to understand at times, but it's not Shakespeare.

Ronan's Mary is a passionate, vibrant woman who wants to unite her kingdom, fractured by strife between Catholics and Protestants. As a Catholic who is recently a widow of the French king, she faces immediate, strident opposition from the heads of the Protestant church, who see her as a papist who bows before Rome instead of the cross.

Robbie's Elizabeth is in many ways the opposite. Regal in bearing but fractured in her soul, she is pulled and pinched by her male advisors (chiefly Guy Pearce as William Cecil) into various ill-advised courses of action. Threatened at first because Mary has a legitimate claim -- and clear ambitions -- to her own throne, she funds a civil war led by Mary's half-brother, James (James McArdle), who bounces between feelings of affection and usurpation for his sibling.

A lot of movies fudge the history in order to obtain a better story. "Mary Queen of Scots" goes the other way, sticking fastidiously to the record even when it would better to have ellipses and combining of characters. I'm not sure if you could keep all the players straight even with a playbill in hand.

Jack Lowden plays Lord Darnley, an ambitious fop who finagles his way into marrying Mary at the behest of his power-hungry father (Brendan Coyle). He thinks she will be a regular wife who allows her husband to be her king and master. But Mary uses him as a plaything, needing the hand of a British prince to cement her claim to England's throne, as well as an heir to make her a more salient prospect than the famously chaste and childless Elizabeth.

Speaking of, the film never adequately explores why Elizabeth is so resolutely sworn to virginity. She has a suitor, Robert Dudley (Joe Alwyn), who she trusts and takes into her bed (stopping their physicality at a certain point). She has a little speech where she says she feels "more a man than a woman" because of her throne, but it's a muddled mumble of a justification. I would've loved to explore that further.

The film is directed by Josie Rourke, a veteran of the stage making her film directorial debut, from a screenplay by Beau Willimon based on a book by John Guy. It has a very "stage" feel to it, even though the cinematography by John Mathieson is wonderful. The movie has a very tactile feel it, from the elaborate costumes to the puckered surface of Elizabeth's face after she is afflicted with the pox (thus explaining the stark white makeup and bright red wig she wore later in life).

The story of two opposing female monarchs, cousins who referred to each other as sisters but often fought as enemies, would make for a frightfully interesting movie. I'm still waiting to see it.

Posted by Christopher Lloyd at 7:54 AM