Review: "Ben Is Back" 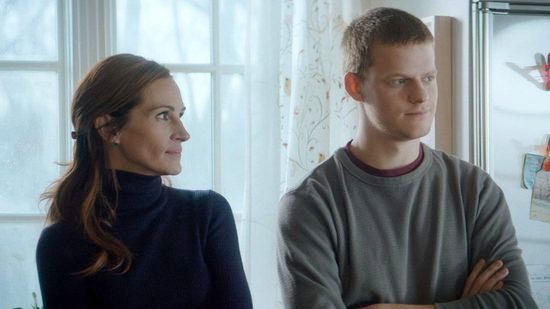 A lot of times a movie is disappointing because it wasn’t what you expected. But on occasion you can feel a film tilting off in a direction you don’t anticipate or even initially like, but you come to appreciate the journey it took you on. “Ben is Back” is such a film.

Julia Roberts stars as the mother of a drug-addicted young man played by Lucas Hedges. At first glimpse it seemed a lot to me like the underwhelming “Beautiful Boy” -- a look at a loving parent whose heart is twisted up dealing with a strung-out kid who always seems to fall back into a spiral. And it starts out something like that.

Ben shows up on the doorstep of his mother, Holly, unannounced on Christmas Eve. He’s been in rehab since summer and this is his first time home. Holly is shocked, surprised and delighted, though she’s been through enough ordeals to immediately start stuffing all the prescription pills and jewelry in the house into a pillow case for stashing. There are oblique references to the disastrous previous Christmas.

Ben’s sister, Ivy (Kathryn Newton), is the good kid who resents the prodigal son’s return -- and theft of her spotlight -- and immediately starts casting a cloud of suspicion and derision. Holly remarried Neal (Courtney B. Vance), a successful businessman who has been paying for Ben’s treatment, and they have a pair of adorable moppets.

With this dynamic laid out, I presumed the rest of the movie was going to examine the internal struggles of this blended family. Neal is supportive of Holly’s devotion to Ben, but pragmatic bordering on hostile to the kid himself. I anticipated a portrait of a seemingly placid, well-to-do clan (re)entering a vortex of crisis.

Instead, the story goes off in a very different direction. Their house is broken into while they’re at church and the family dog stolen. Ben, who wasn’t just a user but a dealer of hard drugs, immediately suspects it’s one of his old nemeses. So he and Holly go looking.

At first I thought writer/director Peter Hedges (Lucas’ real-life father) was setting up a small trip to break up the family-at-home dynamic. But then the errand turns into an expansive journey, in which the extent of Ben’s former depravity and dishonesty is played out before Holly’s horrified eyes. Indeed, it takes up the entire rest of the movie.

I first resisted this turn of the tale. I thought of other movies (“Funny People”) that started out great and then systematically flushed themselves down the toilet with an ill-thought excursion, geographically and/or metaphorically.

And yet, I found myself increasing engaged by their trip, which is truly a descent. Holly has always believed that Ben is a good kid who just went awry due to the lure of drugs. She’s a cheery suburban mom with layer of iron hidden underneath. In one arresting scene, she confronts Ben’s pediatric physician whose initial prescription of pain killers first got him hooked.

It’s one of Roberts’ best performances, full of both sympathy and snarl. Her Holly isn’t some innocent dolt who allows her hopes to overcome her grasp of reality. She goes in with eyes wide open… but then they get opened even wider.

I found Lucas Hedges’ work in “Manchester by the Sea” to be overpraised -- I could easily come up with the names of a half-dozen other actors more deserving of his Oscar nomination -- but he earns the attention he’s getting here. His Ben is a liar who will tell you he’s a liar as a disarming tactic in order to ease more deception. He’s a lost soul but not an unredeemable one.

I went into “Ben Is Back” thinking I had it all pegged, and then it turned me around and left me utterly surprised, sobered and delighted.