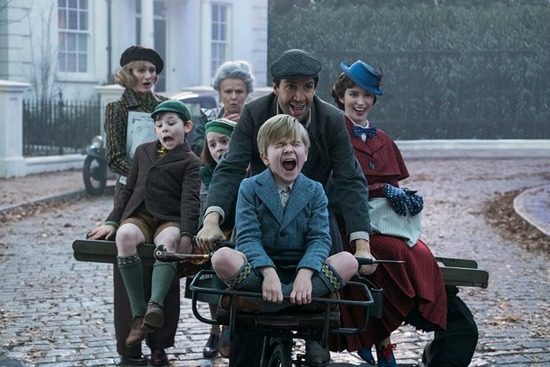 “Mary Poppins Returns” doesn’t just bring back the characters and settings from the iconic 1964 film. It actually attempts to revive the musical genre as it was more than a half-century ago: blessedly un-ironic, family-friendly and with snappy old-school Broadway-style show tunes.

It garnered a PG rating from the MPAA, but really it doesn’t even merit a hard G.

I’ll be curious to see how modern audiences respond to a movie that, aside from a little CGI animation, could’ve been plucked straight out of the 1960s and dropped into theaters today. There are some zippy action sequences and big show pieces, but I’m not sure if dancing and singing is enough to hold the interest of smaller children. (My kids’ attention wandered.)

First and foremost, let’s talk about Emily Blunt taking over Julie Andrews’ first, and most famous, role. She’s terrific, and her singing is tremendous. Blunt brings some of that slight touch of imperiousness but without trying to mimic Andrews’ mannerisms. Her Mary is friendly but a little frosty. All her interactions are tinged with the certain knowledge that she will soon depart.

Still, when she first comes riding down out of the clouds, holding her umbrella and with her high heels cocked akimbo, it’s a pretty magical moment.

The story, based on the works of P. L. Travers, again has her helping out the Banks children, though a new generation. Michael (Ben Whishaw) and Jane ( Emily Mortimer) are now grown up, and Michael has three moppets of his own. He’s recently a widower, and money is tight in Great Depression-era London. The tale opens with a pair of bank collectors nailing an eviction notice on the door of the Banks family home.

The head banker, Wilkins (Colin Firth), offers his sympathy but we don’t really believe him; he twirls his gold pocket watch a little too flippantly. Mary Poppins arrives just in time to watch over the children -- Annabel (Pixie Davies), John (Nathanael Saleh) and Georgie (Joel Dawson) -- while Michael and Jane search desperately for the certificate of bank shares that will save the day.

(If you can’t spot where it is early on, you’re not paying attention.)

Of course, the story (screenplay by David Magee) is merely an excuse to set up adventures and singing. The score and songs are by Marc Shaiman, with lyrics by Scott Wittman. They’re quite good, though I’m not sure if any will go on to become as immortal as “A Spoonful of Sugar” or “Super‐cali‐fragil‐istic‐expi‐ali‐docious.”

Personally, my favorites are “Trip a Little Light Fantastic,” which is accompanied by some ravishing animation that the characters step into, and “Nowhere to Go But Up,” a helium-fueled flight of fancy.

Lin-Manuel Miranda, no stranger to musicals, cements the supporting cast as Jack, a working-class lamplighter who apprenticed to Bert, the Dick Van Dyke character from the original. Speaking of, Van Dyke himself pops up for a little number, showing off a nice little soft-shoe at age 92. Julie Walters is the cantankerous Banks housekeeper, Ellen.

Meryl Streep turns up as Topsy, a vaguely Slavic cousin of Mary’s who can fix most anything, when her home isn’t turned upside down. Angela Lansbury also has a bit role, and David Warner plays Admiral Boom, the retired naval office next door who insists upon firing a cannon to mark the hour, though he’s getting older and is always five minutes off.

Director Rob Marshall is a musical veteran (“Chicago,” “Nine”) who keeps things moving at a brisk pace, providing just enough characterization and story to glide us into the next razzle-dazzle musical number. This is good old-fashioned moviemaking with no ambitions beyond to entertain. But that it does, and in many spoonfuls.