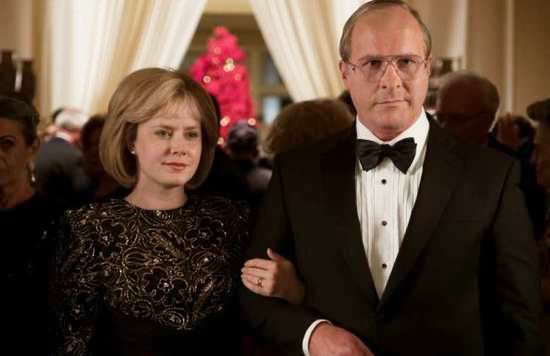 “Vice” comes not to illuminate, but eviscerate. Unlike other portraits of powerful men in the WHite House (“Nixon,” “W.”), there is no attempt to show nuance or pursue inquiry. The reason this film exists is to condemn former Vice President Dick Cheney, to call him out as an evil and corrupt man.

There’s nothing else to call it but a hatchet job. It’s a well-made, splendidly acted one, caustic and occasionally quite funny. But let’s call a spade a spade.

Three years ago writer/director Adam MacKay made “The Big Short,” which I marveled at its ability to be so angry and so funny at the same time. “Vice” does the same, although the proportions are way out of whack.

The thing people will talk most about is the transformation of Christian Bale. And it’s a knockout. The tall, lean actor of “Batman” is so physically and vocally spot-on as the late-middle-aged, bald and portly Cheney that they barely even needed to superimpose Bale’s image into historical photos and footage.

His Cheney is a growly bear of a man, one who speaks in a guttural monotone punctuated with odd pauses. He’s obsessed with power, gaining it and using it.

The portions covering his early life are rather flat and sketchy. Amy Adams plays his wife, Lynne, a powerful woman who demands that he reform his wayward path. After failing out of Yale, he became an electrical lineman in Wyoming who racked up two DUIs. But he turned things around, earned college degrees and became a congressional intern, eventually allying with a young Congressman named Donald Rumsfeld.

If Bale’s Cheney is the film’s dour yang, then Steve Carell’s exuberantly mercenary Rumsfeld is the giddy yang. Together they would move up to Nixon’s White House, and then become the youngest Secretary of Defense and Chief of Staff, respectively, under the Ford administration.

The story bounces around in time somewhat, with Cheney’s relationship with former President George W. Bush (Sam Rockwell) as the framing device. Like other Hollywood movies, “Vice” portrays the 43rd president as a bumbling yokel out of his element in the corridors of power. The Machiavellian Cheney sees this as his chance to remake the office of the vice presidency from a ceremonial BS job into a locus of dark, secretive power.

Much of MacKay’s story is taken from the historical record, but overlaid with a heavy slathering of showbiz razzmatazz that often crosses the line into outright mean-spirited fabrication. For instance, the controversial “outing” of CIA agent Valerie Plame is shown to be done explicitly at Cheney’s orders. (Even though a State Department official, Richard Armitage, admitted that he inadvertently slipped the info to columnist Robert Novak.)

Rather than just show Cheney to be a bad guy, MacKay goes for the whole hog: declaring that the blame for much of our problems today, from ISIS to the concentration of wealth, can be laid at Cheney’s feet.

The movie repeatedly throws up titles about the “unitary executive theory,” a bit of legal doctrine embraced by Cheney that has been interpreted by some to mean the president essentially has the powers of a dictator. There’s even a furtive flashback to the 1970s with a young Antonin Scalia, later a conservative stalwart on the Supreme Court, first introducing Cheney to the concept.

In the end “Vice” plays out as a conspiracy theorist’s dream, intercutting horrible war footage and mistreatment of Iraqi prisoners with Cheney clomping along the hallways of the White House. I swear there’s even a snippet of the recent California Camp Fire in there -- I guess that’s Cheney’s fault, too?

It’s fine to loathe Dick Cheney and even make a whole movie to that effect. But that doesn’t mean it’s going to be any good. Despite the masterful performance by Bale, “Vice” plays as a venomous takedown of a personality-challenged right-winger Hollywood loves to hate.

I didn’t have any particular sympathy for Cheney going into the movie, but it stacks the deck so badly I did afterward.