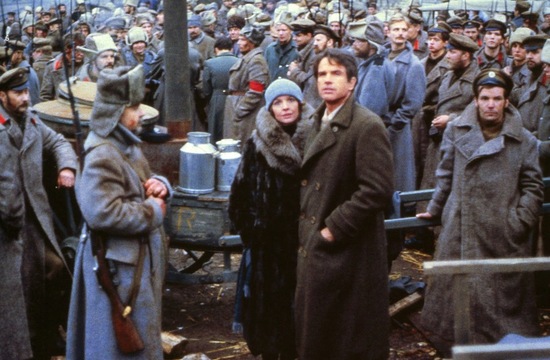 "Reds" has an impeccable cinematic resume. It was nominated for 12 Academy Awards and won three -- director Warren Beatty, supporting actress Maureen Stapleton and cinematography by Vittorio Storaro. It took a year to shoot and cost a bunch of money... and made a surprisingly decent amount, too. It occasionally crops up on various "best of" lists, including the American Film Institute's roster of best epics.

And it's a dreadful, overlong bore.

The film's greatest value is in highlighting the lives and work of two relatively unsung American writers and leftist activists, John "Jack" Reed and his erstwhile wife, Louis Bryant (Diane Keaton). They were unabashed socialists in the 1910s who not only wrote sympathetically about the Russian Revolution from a front-row seat -- including Reed's seminal book, "Ten Days That Shook the World" -- but advocated for its spread to American and other shores.

Reed founded a splinter communist party in the U.S. and traveled to Russia to beg for its recognition, wound up in a Finnish prison and traveled the globe on behalf of the nascent Soviet Union, trying to spread communism. He is one of only three Americans buried in the Kremlin.

It was (and still is) a touchy subject for a mainstream movie, especially arriving in theaters in the same year that Ronald Reagan's presidency began along with a resurgent sense of national patriotism. Although I think Beatty, who co-wrote the script with Trevor Griffiths, isn't so much advocating a specific political view as offering a portrait of people who were very passionate about their beliefs.

We can argue about whether history has borne out the value of Reed and Bryant's advocacy of Marxism/Leninism -- as a center-right guy, I would offer an emphatic "no" vote -- but ultimately the film is about the people, not the politics.

The movie's biggest problem is that it can't decide if it's Louise's story, Jack's story or the story of the American communist movement. It starts out as very much from Louise's perspective, as she abandons her stable, safe life in Portland, Ore., as the wife of a prosperous dentist to follow writer/rabble-rouser Jack to New York to live a bohemian life in Greenwich Village.

We've seen this sort of thing before in the movies: intellectuals gathered in cafes or stuffed into apartments, downing booze and talking, talking, talking. Everyone's supposed to be penniless yet they always have money for rent, lavish dinners, alcohol, posh clothes and white lilies, which Jack is continually lavishing upon Louise.

She's resentful of his constant comings and goings, to either write about the labor movement or actively participate in it. Louise feels she can't found her own identity as a writer in Jack's shadow. She hates being known as just "Jack's girl" -- especially since there's been a long line of them.

Louise is mortified when she's dismissed as an intellectual lightweight by Emma "E.G." Goldman (Stapleton), a notable anarchist and guiding light for the communist movement, who later became disillusion by its implementation in Russia.

Eventually, the film leaves along with Jack on his various excursions, and it becomes his movie. The part after the intermission is a long, interminable series of meetings and rallies as characters repetitively spout revolutionary jargon at each other. First it's in New York, then in Petrograd and later in the Mideast.

An attack by counterrevolutionary forces on the train Jack is traveling aboard seems tossed in just to give the film one bona fide action scene.

Louise more or less disappears during this part of the film, other than a few snippets that show her on various journeys to come to his aid. By the time she reaches Finland, he's been gone for months. She and Jack finally reconnect in the end, just in time for him to die of typhus and deliver the quote at the top of this article as his last words.

The film was marketed as a love story, focusing on the ménage à trois involving the pair and playwright Eugene O'Neill. He's played by Jack Nicholson in a sly performance, a man who very much wants to be seen as a hard-hearted intellectual but is really a vulnerable romantic at his core.

In truth, Nicholson is barely in the movie. He essentially has one significant sequence in which he's romancing Louise, which mostly plays out as a wordless montage of canoodling. Then he shows up again for a couple more brief scenes near the end where Louise seeks his help in rescuing Jack from his accursed Russian adventure. He has perhaps a total of 10 minutes of screen time in a very languid 3¼-hour-long movie.

Stapleton has even less of a presence, and her beating out Jane Fonda for "On Golden Pond" for the Academy Award feels like a massive error in retrospect. But it's not the first time the Oscars have gotten it wrong.

The other noteworthy thing about the movie is the inclusion of "The Witnesses." These are various contemporaries of Bryant and Reed, now very elderly, who were brought in for video interviews. They chat about their affairs, their lifestyle, their politics, the significance of their actions in the broader historical context -- a lively mix of analysis, remembrance and gossip.

Beatty weaves these interviews into the narrative cleverly, at times acting as segues from one sequence to the next, but even as narration that sets up or comments upon scenes as they're happening. They range from author Henry Miller to congressman Henry Fish, the son of Alexander Kerensky, various socialists, journalists and proto-feminists.

At times I wondered if Beatty's vision to tell the story of Jack Reed would have worked better as a documentary. If they were going to stick with a narrative work in today's cinematic climate, I'm sure the project would've ended up as a Netflix or HBO limited series.

For me, the movie's highlight is the time Louise and Jack spend in Russia during the revolution, as they reconnect as writers and as lovers. They live, breathe and eat journalism, firing off first-hand accounts of one of mankind's most pivotal moments in history. They edit each other's stories, insisting they keep the good stuff in and cut the weaker prose out.

I can only wish the filmmakers had followed this model themselves. A much shorter movie that focused on this period would have been considerably more effective, I think.

In addition to those I've mentioned, "Reds" has a superlative cast of supporting performers, many of whom only get a brief moment on camera. They include Edward Hermann, Paul Sorvino, M. Emmet Walsh, Gene Hackman and George Plimpton.

Beatty never intended to star in the film -- he was already 12 years older than Reed was at the time of his death when "Reds" came out -- and reportedly wanted to cast John Lithgow in the lead. (If you look at photos of Reed, his soft, cherubic features are nearly a perfect match for Lithgow's.)

After the tremendous success of his directorial debut, "Heaven Can Wait," Beatty was a man who found himself at that rare moment in Hollywood where he could write his own ticket. In this context, "Reds" registers much as the "very important artist" moment of his career.

He wouldn't act in another movie until 1987's notorious "Ishtar," then had a bit of a career resurgence in the '90s with "Dick Tracy," "Bugsy" and "Bullworth," and then has more or less disappeared from filmmaking and the public view while very much remaining a pop culture figure. His more recent forays, with the barely-seen "Rules Don't Apply" in 2016 and flubbing at the Oscar ceremony for "Moonlight," have somewhat dimmed the luster of his star.

Personally, I don't blame Beatty for his itinerant work. It's better to do things you truly believe in, rarely, than a whole bunch of mercenary stuff for a paycheck. But just because you have a lot of passion doesn't ensure the work is going to be any good.