Review: "Spider-Man: Into the Spider-Verse 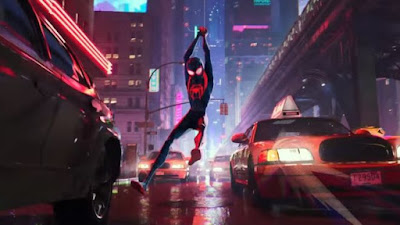 One thing I don’t get: why does the new Spider-Man wear sneakers? Wouldn’t that mess up his ability to stick to walls and such?

Oh, well. If that’s the worst complaint one has about “Spider-Man: Into the Spider-Verse,” the retconned spinoff of the Spidey franchise, they’re doing alright.

After all, this is a story that brings in a half-dozen or so Spider-people from other dimensions, all battling their common nemesis, Kingpin. One’s even a pig in a miniature version of the iconic red-and-blue outfit named Peter Porker.

I wasn’t sure how I would feel about yet another version of Spider-Man, with yet another actor inhabiting the role. And an animated film would make it seem too much like a TV show, I feared.

What the filmmakers have delivered is an incredibly fast-paced movie that plays like a cinematic version of flipping through a comic book, with inset images and freeze frames intruding upon the normal imagery. It seems aimed at older kids (age 8 and up, I’d guess), though it’s an enjoyable experience the whole family can enjoy.

The notion here is that in our universe, Spider-Man/Peter Parker is killed by Kingpin (voice of Liev Schreiber) at age 26 after 10 years wearing the costume. This is witnessed by Miles Morales (Shameik Moore), a gawky Afro-Latino teen who has just been bitten by a radioactive spider himself and started to exhibit the same powers.

Kingpin had been building a massive collider device to breach dimensions, and as a result of the experiment several other versions of Spider-Man are sucked into Miles’ reality. They range from the creepy to the comedic, starting with Spider-Ham (John Mulaney), the aforementioned porcine knockoff. Nicolas Cage does the voice of Spider-Man Noir, who is from the 1930s and wears a trench coat and fedora hat, and even is rendered in black-and-white.

There’s even two females: Gwen Stacy/Spider-Girl (Hailee Steinfeld), who wears a cool white costume, and Peni Parker (Kimiko Glenn), a Japanese girl from a distant future who wasn’t actually bitten by the spider, but instead became friends and together they battle crime in a spider-robot.

The first one Miles runs into is a version of Peter Parker (Jake Johnson) who’s pretty close to the “normal” one, except life hasn’t gone so well for him. He’s about 40 years old, graying and a bit paunchy, divorced from Mary Jane and only fighting crime sporadically, mostly just handing his apartment eating pizza and feeling sorry for himself.

Miles forms a bond with this Peter, who after some kvetching is eventually persuaded to act as a sort of mentor/teacher. He helps Miles bone up on the Spidey powers, as well as discovering a couple Miles has that he doesn’t: the ability to turn invisible and emit electrical charges through his hands.

I liked the colorful, perspective-bending look of the movie, which combines elements of German Expressionism, steampunk, Japanese anime and probably a few others. The film was directed by Bob Persichetti, Peter Ramsey and Rodney Rothman, the latter of whom also co-wrote the script with Phil Lord (“The Lego Movie”).

For example, Kingpin is so big that his head appears on the front of his massive body, a few feet below his shoulders. Green Goblin is reimagined as a reptilian titan, and Doctor Octopus (Kathryn Hann) is a woman who sort of resembles Professor Trelawney from the Hatter Potter movies, less ditzy and more diabolical.

“Spider-Man: Into the Spider-Verse” takes a Cuisinart to the hero’s mythology, cutting everything up into bits and reassembling the pieces into other configurations. It’s a lot of fun, even if I still don’t get the shoes.