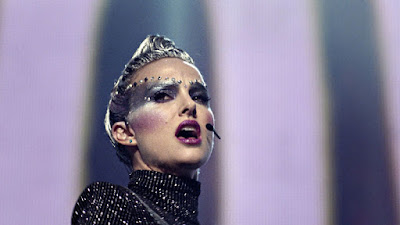 "Vox Lux" is a movie about... something. I'm honestly not sure what. It stars Natalie Portman in the second half as a Lady Gaga-esque pop superstar struggling in her relationships with her sister, daughter and manager. In the first half the character shows how she got where she is, parlaying a horrible childhood incident into a career.

The last 20 minutes is Celeste's big comeback concert -- though don't you dare call it that -- and we're treated to an elaborate stage show of lights, pyrotechnics and exuberant dancing as Portman warbles through various techno-tweaked tunes that could have been sung by, well, anybody.

The Celeste of the first half is a sweet kid of 14 tempted by the sparkle of fame and fortune, and in the second half she's a total rhymes-with-witch who seems decades older than her 31 years, resentful of all the attention she gets while not-so-secretly feeding off it to sustain her sense of self.

All of this is accompanied by flat, emotionless narration by Willem Dafoe. It's the sort of narration that doesn't tell you anything the movie doesn't, so you wonder why it's there.

Surprisingly, it's the second half that's hard to get through. Portman plays Celeste as a shrill, nasty harpy who somehow forgot she's supposed to be the nice girl. There's no emotional match with the wide-eyed kid she was, played by Raffey Cassidy. We wonder what happened in the in-between.

I'd have liked to have seen that movie.

We follow Celeste around as she has nasty encounters with the press, with a restaurant manager who asks for a photo, with her manager (Jude Law), her sister, Ellie (Stacy Martin), her teen daughter, Albertine (Cassidy again) and well, pretty much everybody. Celeste is estranged from Ellie, who writes her songs and takes care of her kid, but gets treated like dirt for her trouble.

The first part is more interesting, when a disturbed classmate shoots up Celeste's class, wounding her seriously in the neck. She wears braces and decorative collars for the rest of the movie. After she and Ellie come up with a heartfelt song for the memorial ceremony, it becomes a national anthem. The manager (never named) is brought in to guide her, which follows a predictable path of ear-candy songs, bizarro makeup effects and squirmy dance moves.

What's the point of it all? I dunno. Writer/director Brady Corbet seems to be trying to fashion a morality tale about how even the most earnest intentions can become twisted in the caldron of the celebrity-making machine. Sounds like a terrible bargain, but not an interesting enough one to watch for two hours.

Posted by Christopher Lloyd at 6:22 PM