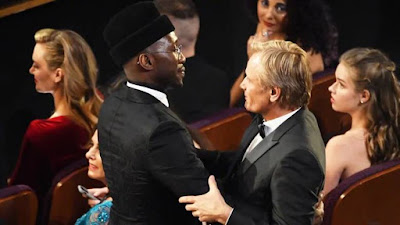 The 2019 Oscars telecast was a night of joy, inclusion and surprises. A lot of people who weren't expected to win or came from demographics that have traditionally been marginalized walked away with the prize. They spread the awards around, with no film winning more than four for "Bohemian Rhapsody."

You can see the full list of winners here.

My official Oscar predictions score: I got 11 out of 24 categories right. That's pretty low for me; I average around 15.

For at least half those I got wrong with the prediction, the film I wanted to win, did. I call that a victory.

In my defense, it was a notoriously difficult year to predict, with plenty of surprises. "Black Panther" dominated the "crew" categories. Rami Malek was the underdog for Best Actor but pulled it out due in part to a furious charm offensive.

Olivia Colman's win was the real shocker. I thought she was great, but it clearly was a supporting performance, just as Mahershala Ali's was a lead. Category-hopping is the new norm.

This year was historic for possibly the most diverse field of winners ever. Three out of the four acting winners were persons of color. We had first-ever wins for African-Americans in costumes and production design. Nine out of the last 10 best directors have been a woman, POC or foreign-born.

The expanded/younger/browner pool of Academy voters is showing dividends.

I see the "Green Book" haters are out in force this morning. That's fine. Some detractors have honest disagreements and good points to make. Some are willfully misreading the film's themes; others are projecting their own hangups and biases upon it. That's fine, too -- the loss is theirs.

It's true to say that the Academy has a long tradition of favoring uplifting, warm-hearted pictures over challenging ones. It is quite another thing to insist that represents irredeemable moral cowardice.

The Kevin Hart debacle has mostly served to remind us how superfluous the host role really is. Aside from the opening monologue, there really isn't much for him or her to do. I liked having lots of different celebrities onstage to introduce and present, though I don't know what business Serena Williams has as a presenter, GOAT tennis player (any gender) or not.

The "In Memoriam" feature always gets me, and this year was no exception. They seemed to be presenting the order chronologically, rather than by saving the biggies toward the end. Was happy to see William Goldman get a prominent slot (and a call-out by one of the presenters). Goodbye, Bill.

I don't understand the rationale in having Best Songs sung by people other than those who sang them in the movie. The contrast between most of the performances and the Lady Gaga/Bradley Cooper duet was just gigantic. It was the moment everyone will remember.

This is the difference between actors and stars.

I was happy to see "Roma," an indulgent bore, not take Best Picture -- though it did win for cinematography (mostly deservedly) and director. I fear this had less to do with love for "Green Book" as fear that bestowing the top prize on a streaming service movie would forever upend the theatrical exhibitor model. That day is coming, but it's thankfully not here yet.

The art of cinema is constantly changing, and new disruptors come to the fore to challenge the old ones. There was saying quoted during the night that I liked, "There are no waves; there is only the ocean." Despite its occasional storms, there's no more thrilling artistic landscape to navigate.

Posted by Christopher Lloyd at 1:02 PM