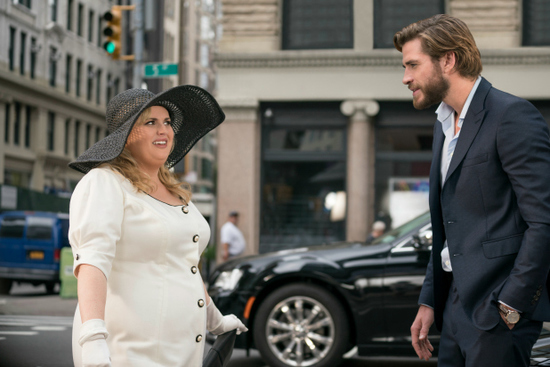 
“Isn’t It Romantic” is a snarky, fairly smart sendup of the romantic comedy genre that still manages to gleefully indulge in every trope and cliché.

Rebel Wilson plays an unappreciated girl who gets conked on the head and wakes up in a romcom fantasy world, where New York City is a happy place that doesn’t smell like doo-doo. Every man she meets looks her in the eye and offers compliments, and at any moment a musical number is in danger of breaking out.

It’s like hell, and she can’t wait to escape.

Wilson has a lot going for her as a star. She’s been playing sidekick roles for about a decade now, and starting to get into a bit of a typecast as the chubby girl who likes to party and get sassy. Now she finally has a chance to break out as the main attraction, and employ her real Australian accent to boot.

She plays Natalie, a young architect who feels ignored in every aspect of her life. She’s got a crummy apartment and a standoffish neighbor, she’s derided and/or ignored at work and feels like no man is willing to give her the time of day because she’s not model-thin and girly.

“They don’t make movies about girls like us,” Nat’s mom chides in a flashback where she’s relishing Julia Roberts in “Pretty Woman.”

Of course, just a few cubicles away sits Josh (Adam Devine), a goofy but loveable guy who would, quite obviously, love to get her attention. But Nat has “friend-zoned” him because part of her can’t accept the fact that a man could adore her. Even having her assistant/best pal (Betty Gilpin) point this out doesn’t convince her.

When a guy flirts with her on the subway, Nat can’t believe her luck. Turns out he was just luring her out onto the platform to rob her, and after a scuffle receives a helluva concussion. When she wakes up, the whole world is changed: every man she meets is gorgeous and attentive. Every street is lined with flowers. Her apartment is suddenly five times as big and chic. Even her dog looks like it’s had a bath and several months of obedience training.

She’s nearly run over by the limo of Blake (Liam Hemsworth), the gorgeous billionaire who she made a design pitch to the previous day, though he blew her off as the coffee girl. Suddenly he’s entranced by Nat, calling her “beguiling” -- over and over again -- and somehow has even acquired his own Aussie accent in the meantime.

They soon begin a torrid affair, but alas! Because romcoms are always rated PG-13, there’s no sex since as soon as they start to get busy it cuts to the next morning. She can’t even curse her frustration because every swear word gets bleeped out by car horns, alarm buzzers, etc.

Meanwhile, Josh finds himself romanced by a gorgeous swimsuit model/yoga ambassador (Priyanka Chopra). And her next-door neighbor has morphed into a swishy gay sidekick (a terrific Brandon Scott Jones) who seems to have no life of his own other than showing up everywhere to support his favorite girl.

“Isn’t It Romantic” bends the satire as far as it can go without popping the bubble of the fact that the prime audience for this movie is those who love romcoms. It’s the sort film movie that has just enough ambition to make fun of a thing while also reveling in being it.