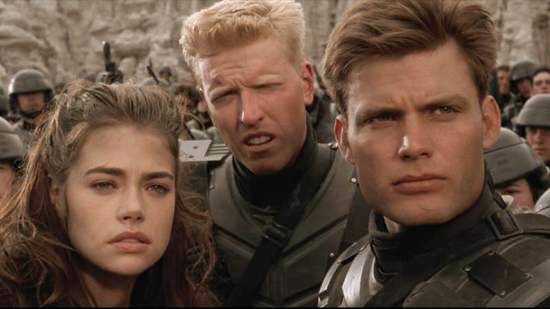 As a teen I really loved "Robocop" and Robert Heinlein's classic science fiction book, "Starship Troopers," so I remember being very excited when it was the announced that Paul Verhoeven, the director of the former, was tackling a screen adaptation of the latter along with screenwriter Edward Neumeier.

Then the movie came out and I (along with not a few others) thought it a total piece of garbage.

It was an expensive flop and, along with the failure of "Showgirls" two years earlier, knocked Verhoeven off the A-list of directors after a decade-long run noted for pushing Hollywood's boundaries for violence and nudity. He's since returned to his roots of European art films ("Black Book," "Elle") and I think we're all better for it.

Turns out the project was not actually launched with the Heinlein book in mind. A spec script called "Bug Hunt at Outpost Nine" had a lot of similarities to the Heinlein novel -- perhaps too many to be a coincidence -- so the studio bought the rights to the book and the script was rewritten combining elements from both.

Verhoeven hated the book and even confessed he was never able to finish reading it. It's been controversial since Heinlein published it in 1959 because of its embrace of an overtly militaristic, and some would even argue fascist, future. In the novel only those who have served in the military, aka Federal Service, are eligible to become "citizens," endowed with full status and the right to vote. Things like extreme corporal punishment (whipping, etc.) and preemptive attacks are looked upon favorably.

I was particularly dismayed that the power suits worn by the intergalactic soldiers in the book were jettisoned. These allowed them to make leaps of tremendous distance and even drop mini-nuclear bombs, essentially turning each of them into a low-grade Iron Man. Instead the movie just has regular field infantry with body armor and machine guns, not terribly different from what the modern U.S. Army wears.

It's understandable why the filmmakers did this. It would have made the $105 million budget, already bloated for its time, even bigger and forced them to hide all their beautiful actors behind helmets and armor. It does make you wonder, though, how hundreds of years into the future humanity has managed to conquer space travel but still relies on an M-16 clone.

In this vision humanity has been united in their opposition to the "bugs" -- insect-like aliens that fly toward Earth on massive meteors. So far all the experts have regarded them as mindless drones, though in the course of the story we discover otherwise.

(I still wish somebody could've come up with a better moniker than "brain bug.")

I have no doubt in my mind that 1979's "Alien" and other films were inspired by the book, and in turn those movies helped shape the chitinous, bulb-headed look of the "Starship Trooper" bugs.
Seeing the movie for the first time in two decades provides a moment for reassessment. I still don't think it's a very good flick. But it's interesting how much of the social satire of "Robocop" carried over into this movie, especially the cringe-worthy TV newscasts, as well as its prescience about how digital communication would come to dominate our society.

There are a number of fake ads to join the military spread or updates on the war spread throughout the movie, always ending with the query of, "Do you want to know more?" It's quite possible that "Starship Troopers" was the very first cultural artifact to envision clickbait. There's also video conferencing, tablet computers and other tech that we now take for granted.

Verhoeven, who knew something of actual Nazism, made what is essentially a spoof of both fascist tendencies and science fiction. It goes through the motions of celebrating these soldiers blasting aliens apart while at the same time making the entire undertaking seem utterly preposterous. Of course, the irony flew right over the heads of many who saw it.

The movie's essential weaknesses, though, remain. It has a cast of gorgeous, then-unknown actors who are given a bunch of ridiculous dialogue to say, which they issue with varying degrees of sniggering and/or woodenness. It's notable that of all of them, only Neil Patrick Harris as psychic/intelligence officer Carl was the only one to break out into a high-profile career.

Perhaps that's unkind; showbiz is fickle and anyone who can continue to work as an actor for decades already sits toward the top of a very steep heap.

Gilliam might contest Harris' crown for top alumnus, going on to play the formerly fraidy-cat preacher in "The Walking Dead" and a prime role on "The Wire," aka the GOAT TV series.

And, of course, Clancy Brown and Michael Ironside were already grizzled veterans playing crusty officers who whip the kids into line as, respectively, Private-nee-Sergeant Zim and Rasczak, the recruits' former high school history teacher and wartime leader of the howling Rasczak's Roughnecks. Brown and Ironside are both science fiction/horror immortals.

At the top in terms of billing but at the bottom of the totem pole talent-wise sits sad Casper Van Dien as protagonist Johnny Rico. It seems clear Van Dien was chosen more for his looks than any innate acting ability. His Rico is so clean-cut and sharp-featured that he practically seems molded out of plastic.

Imagine James Dean, but with good posture and straight from an aggressive barber. (Indeed, Van Dien had just played Dean in a television movie.)

As a main character Johnny is a total zero. He joins the Mobile Infantry because that's what Carmen wants, only to find them separated when she has the math scores to make it into the Federation Fleet, essentially the Navy of this story. They eventually rejoin, though now separated by the enmity between the military branches. "M.I. does the dying. Fleet just does the flying!" Johnny says, echoing a common refrain.

It should be noted that the book and the movie posit all the youngsters as coming from Buenos Aries, and I don't think there's a legitimate Latino in the bunch.

The special effects looked cheap even in 1997, and are comically outdated now. The nascent CGI for the bugs isn't awful, just stiff and superficial-looking, but the space travel stuff was already at least two decades past its prime.

Of course, Verhoeven opted for his usual all-you-can-stand buffet of gore and violence, with literal rivers of viscera -- human and alien -- splashed across the screen.

Interestingly, probably the most talked-about scene at the time was not any of the many bloody battles but the coed shower shared by the M.I. recruits. It's a throwaway scene of little value other than to show off the bodies of the actors. According to lore the cast refused to film it unless Verhoeven would also get nude, and he readily complied.

"Robocop" actually predated this with its police locker room shared by both men and women, with the gals nonchalantly showing their upper-body wares. "Troopers" goes one better with a fully nude open-air shower room where everybody enjoys a comradely chat about their budding military careers while sudsing up their nethers. The camera is carefully framed not to show too much, and the whole thing is so goofy and jovial that it turns into a (literal) ass-slapping yuk-fest.

I'm not sure how such a scene would play today, with our fretting over who's using which public restroom and some feminist insistence on an omnipresent threat of rape. Beyond the leering voyeurism of the scene, though, it contains a hopeful message about the genders being able to relate to each other as true equals without the burden of always-on sexual dynamics -- a future I fear will remain a pipe dream.