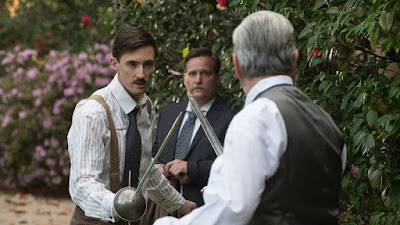 Not too many people can say they were a Hollywood stuntman and screenwriter, newspaper reporter and publisher, a novelist and a serial ladies' man who nonetheless remained married to the same woman for 66 years.

But that's the tale of John Weld, told with zest and empathy in the documentary, "The Remarkable Life of John Wild." He survived his ship sinking after a mid-ocean collision as well as an actual duel -- brought on by his tendency to woo married women, including the one he stayed with the rest of his life.

Though this movie doesn't have the grandest scope or the highest production values -- the recreation of the ship disaster is borderline hokey -- director Gabe Torres and writer Rob Lihani paint a vivid portrait of Weld in just 76 minutes of running time. They make the daring choice to use recreations for most of the tale using actors, so it plays more like a historical drama than a dry documentary.

There are still interviews and reminisces with family members, historians and showbiz experts to provide the sense of an authoritative biography. But the feeling you most get from watching this movie is that Weld's loved ones got together and decided others ought to know him as they did.

Weld was certainly not a household name, either for his Hollywood career or his writing. Still, he published 11 books and ran his own small California newspaper for a time. While making movies in the 1920s he was a stand-in or stuntman for the likes of Tom Mix and John Barrymore.

Some of the most hair-raising sequences are recreations of filmmaking from the silent era, when there was virtually no such thing as safety nets or protocols. Weld did things like dive 135 feet from an ocean cliff or plunge into a raging river while wearing a dress and wig.

One of his earliest books recaptured his daring days, and he was actually brought back to Los Angeles from his New York reporter job to take a stab at turning it into a screenplay. After a number of failed attempts -- including the studio's suggestion they make his character a woman -- he gave up.

I lost count of how many romances Weld had -- often with wealthy women or wives of rich men. He suffered two divorces at a young age after impetuous marriages that didn't last long, and seems to have decided at some point that he could have his milk without buying the cow.

Nick Tag plays Weld for most of the movie, and he has a rather Jimmy Stewart thing going on -- thin, handsome face, piercing blue eyes and an aw-shucks kind of charm. Claire Adams plays Gigi, the young married starlet he fell hard for and eventually wed for good. They shared a life of adventure together despite remaining childless, as the movie skims through -- rather too quickly -- their lives post-1940.

Darren Kendrick and Varda Appleton take over the roles for the framing sequence set around the sinking ship in the 1960s. Magnus Warmsley plays Weld as a boy.

Probably the most gleefully entertaining sequence is the duel. Living in Paris in the 1920s, Weld hobnobbed with other writers including James Joyce and caroused healthily with the feminine sex. When a French count (Orion Barnes) with whose wife he was canoodling has her followed by detectives, this results in the duel with rapiers.

Weld at first takes the whole affair as a joke, until the count starts trying earnestly to stab him through the chest. Fortunately, he had learned some swordplay during his stunt days, and the event plays out in a surprisingly convivial way.

John Weld is not the kind of person who normally gets a movie made about him. He did indeed have a remarkable life, though not the sort that produces the newsworthy tales or celebrity most associated with biographical documentaries. But it's a story of perseverance and adventure, a man who take life as it came and made the most of every chance he got. Few can claim as much.

Posted by Christopher Lloyd at 5:26 PM