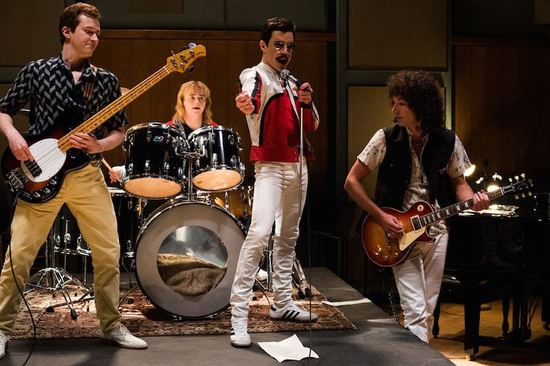 Is “Bohemian Rhapsody” too entertaining of a movie to win Academy Awards? We’ll find out in a couple of weeks, but I think people have been overlooking the film’s excellence precisely because it’s such a crowd-pleaser.

The film has been up and down in the awards race. I don’t believe it’ll win the Oscar for best picture, but it deserves at least stalking horse status. Rami Malek is a revelation playing Queen frontman Freddie Mercury, who had the voice and strut to make people stand up and take notice.

Directed (mostly) by Bryan Singer from a screenplay from Anthony McCarten, “Bohemian Rhapsody” is more than your standard rock ‘n’ roll biopic. It takes us on a journey with Freddie and bandmates Brian May (Gwilym Lee), Roger Taylor (Ben Hardy) and John Deacon (Joseph Mazzello) as they quickly rise from college bar band to one of the premier pop acts of the 1970s.

The story primarily focuses on Mercury’s tale, a buck-toothed foreign kid who had a hard time assimilating into British culture -- especially as he became more aware of his attraction toward other men. He had a years-long relationship with a woman, Mary Austin (Lucy Boynton), that provided the sort of stability he needed but did not satisfy his romantic urges.

And the rest of the band does not get lost in the story. They push back against Freddie’s egomaniacal behavior and artistic impetuousness. They have lives and relationships of their own going on in the background.

Mostly this film is a celebration of one of the greatest bands in popular culture -- what it took to get to the top, and why that sort of success is so rare. It may not take home Oscar gold, but “Bohemian Rhapsody” is one of the best films of 2018.

Video extras are a little disappointing. There are three documentary shorts: “Rami Malek: Becoming Freddie,” “The Look and Sound of Queen” and “Recreating Live Aid.” There is also complete footage of their famous Live Aid performance in 1985, which marked a return to glory for Queen.