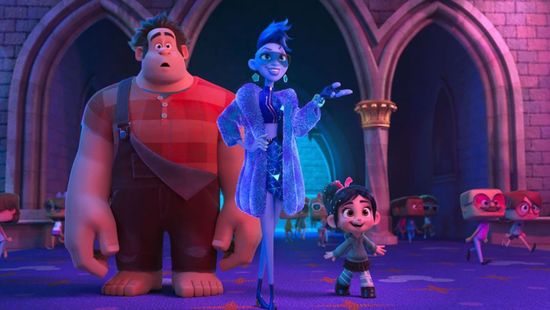 First off: Why isn’t it “Ralph Wrecks the Internet?” You’d think a simple callback to the last Disney animated film would be an obvious choice, as we’re bringing back arcade game villain-turned-huggable-hero Ralph for another adventure.

Maybe some wonk in the marketing department said “breaks” would test better. Perhaps if they’d concentrated on coming up with a little more coherent narrative, this wouldn’t have been a mildly disappointing sequel.

The idea here is that Ralph (voice of John C. Reilly) and tiny tot racing demon Vanellope (Sarah Silverman) find themselves leaving their staid little arcade for a trip into the wild, wild internet. It seems the wheel o Vanellope’s game has broken and if they don’t find a replacement one on eBay, she’s going to get permanently unplugged.

Their adventures are fun and colorful, at least at first. All the various Web power players -- Google, SnapChat, etc. -- are represented as their own power hubs that human avatars come to for information and entertainment. They get a little help from one of those pop-up ad barkers, and also from some (initially mean) denizens of an online racing game.

The “Ralph” sequel puts the sidekick character behind the wheel, as it’s really more Vanellope’s story than Ralph’s. The theme is about how people constantly grow and evolve, and sometimes that can mean trouble for their relationships. In this case, Vanellope has grown tired of playing the same game over and over, while Ralph is a creature of habit.

It’s kind of the same thing they did with “Cars 2” by putting Mater to the front -- the difference being it wasn’t the “Lightning McQueen” franchise.

What’s in a name? Apparently, a lot.

Bonus features are quite good, including a hefty making-of documentary. My favorite bonus is “Surfing for Easter Eggs,” which lets you see all the little in-jokes and pop culture references spread heavily throughout the movie.

There are also five deleted scenes, music videos, and features on the music and pretend viral videos.