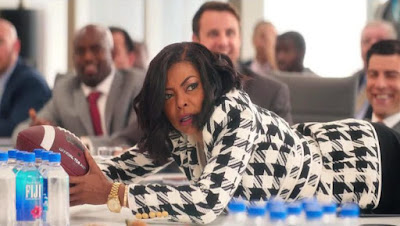 I’m not sure if you’d dub “What Men Want” a sequel, a remake or a reboot of “What Women Want” from nearly 20 years ago. Let’s call it a spiritual inheritor.

It’s about a successful, not-particularly-nice person who gets conked on the head and finds themselves able to hear the thoughts of the opposite sex, which leads to lots of zany hijinks but also helps them become a better person.

The first film was a huge hit but wasn’t well-liked by critics, and I suspect this one won’t be, either. But it’s got heart, laughs and more than a little sass.

Taraji P. Henson plays Ali, a hard-charging sports agent at the powerhouse Atlanta firm of SWM. Anticipating being named partner, she leases a Porsche to flaunt her success. (Like anyone who’s spent time in The ATL, I chuckled at the scene showing her driving downtown at rush hour with absolutely zero traffic. Talk about Hollywood fantasies!)

But she doesn’t get the gig, as she’s again passed over in favor of some lunkhead young dude. It’s a boys’ club, and they’ll let her play but not take home the trophy.

“You do great in your lane, so why don’t you stay in your lane?” her smarmy boss (Brian Bosworth) says.

As she’s raging against the injustices of her environment, we also learn that Ali is not a very well-rounded person. She treats her assistant, adorable gay dweeb Brandon (Josh Brener), like dirt. When she seduces a gorgeous bartender named Will (Aldis Hodge), we even learn that she’s pretty lousy in bed.

Redemption lies in the person of Jamal Barry (Shane Paul McGhie), who will soon be the #1 NBA pick for the hometown Hawks. Land Jamal, Ali’s boss offers, and she’ll get her prize. But that also means negotiating around Jamal’s unbalanced control-freak father, Joe “Dolla” Barry, played by Tracy Morgan in a portrayal that is totally not a sendup of LaVar Ball.

There’s a lot of things to like about “What Men Want.” Henson oozes a sort of anxious charisma playing a woman who’s never slowed down enough to consider whether she’s making a positive impact on those around her. There’s some good snaps in the dialogue, and a crazy wedding scene that looks like something out of a reality show meltdown.

The movie isn’t terribly insightful about the differences between the genders. And the mostly-male creative team strives mightily to clean up men’s thoughts from the cesspool I’d guess they’d really be.

My guess is what men want most is for women to never find out just how gross we are on the inside.