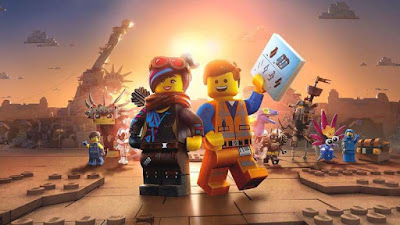 There’s a moment that arrives for each of us when we first truly feel old.

Maybe it’s flailing at some athletic endeavor that barely made you break a sweat back in the day. Or it’s a cultural disconnect, when you realize you not only don’t like the music that’s popular right now, but you can’t even name a top artist or song.

For me it was 2014’s “The Lego Movie.” My then-3-year-old found it to be wonderfully zippy, colorful and fun. Although I liked the film, I spent most of it mentally shouting, “Please slow down, this movie is going way too fast for me to follow!!”

Though it’s more palatable on subsequent viewings -- especially on video where you can pause and rewind -- the movie throws so much visual and verbal information at you at once, it can be an overwhelming experience for us past-young folks.

The sequel, “The LEGO Movie 2: The Second Part,” doubles down on the blazing incomprehensibility. My son, now 8, declares it even better than the original. My eyes and brain, now five years older, had an even harder time keeping pace.

Though there are certainly some enjoyable sections and throwaway jokes aimed at adults, this is a movie strictly for the kids.

The story picks up exactly where the last left off. If you’ll recall, the LEGO figurines were acting out a version of the playtime of a human father and son, in a very “Toy Story” kind of way. Dad finally learned to let go and allow his son to mess up his elaborate LEGO sets, but since he was letting him play with the stuff it was only fair to bring in his kid sister, too.

Turns out the siblings (Jadon Sand and Brooklynn Prince) did not get along. The utopian LEGO wonderland created by the fall of Lord Business has morphed into a Mad Max-like wasteland dubbed “Apocalypseburg” in which the sullen inhabits fight off near-daily invasions by cutesy aliens courtesy of sister’s more bedazzled imagination.

Emmet (voice of Chris Pratt), the everyman hero whose quest was all about finding out whether he was special -- hint: we all are -- is now seen as hopelessly out of touch. Even his lady friend, Lucy/Wyldstyle (Elizabeth Banks), tells him he needs to grow up and get grimmer. Batman (Will Arnett) is their new savior since he’s already sufficiently dark and brooding.

The trio and a few other key team members -- robot/pirate MetalBeard (Nick Offerman), spaceship-obsessed Benny (Charlie Day) and bipolar unicorn/feline Unikitty (Alison Brie) -- are whisked away to the Systar System where they must face off with their counterparts. But it turns out their leader, shapeshifting Queen Watevra Wa-Nabi (say it out loud), voiced by Tiffany Haddish, is proposing an alliance.

Another newcomer is Rex Dangervest, a dashing adventurer also voiced by Pratt who gives Emmet advice about growing up and being more manly. The joke is that Rex is a mash-up of Pratt’s other big-screen roles as a raptor trainer, space hero and cowboy.

There are a few fun musical sequences, with a new earworm to replace the “Everything Is Awesome” song from the last movie, which also gets a somewhat moody reprise. Haddish gets her own tune, and turns out to be surprisingly more mellifluous than you’d think based on her comedy persona.

“The LEGO Movie 2” is pretty much more of the same. If you’ve seen any of the other LEGO movies you know what you’re getting, and that your kids will undoubtedly like it, and you’ll feel a little dazed after watching it. Take heart that this will be them someday.