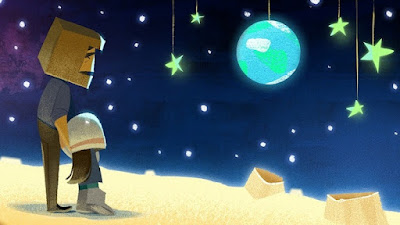 Wow, this little space story will get your right in the heart. Told wordlessly with simple animation, it’s the tale of a daughter and her father. Knowing her love of space and science, the dad encourages her with astronaut boots and helmet. As the years pass she grows into a determined young woman who keeps him at arm’s length. A tailor, he expresses his love through food and repairing her shoes. Timeless and evocative.

This ambitious Pixar short caused some controversy when it came out due its portrait of a sensitive subject – a mother’s cloying relationship to her son. Upset about continually being pushed away, she creates a surrogate in the form of a dumpling that comes to life. But the same dynamic grows between them, a young man anxious to cut the apron strings and a mother whose love can sometimes be an intrusive burden.

Yes, another short film about the relationship between parent and child. In this case it’s the tale of Emily, an old woman living with dementia. With the assistance of her helper, Kate, she spends the afternoon flitting in and out of the past, recalling her childhood playing on the beach, trying to catch a train, taking a bike ride, etc. Earnest and exquisite

A little boy spends weekends with his dad in his heartstring-pulling look at a fractured family. Things are fun and cool at dad’s: he lives in the city, is into video games and Japanese samurai stuff. Meanwhile, mom’s place is dull and she’s studying to be an accountant. But as time passes the boy comes to see the value in both parents’ environments, as well as the shortcomings.

Points for being the one short that’s not about the animator working out their parental hang-ups. A bird, a cat, a leech, a pig and a praying mantis are having a group therapy session with Dr. Clement, a dog psychiatrist. They’ve each got issues -- the leech has abandonment issues, the mantis has a tendency to kill her boyfriends -- but then an angry ape shows up and things really get wooly and wild. Fun, funny and smart.