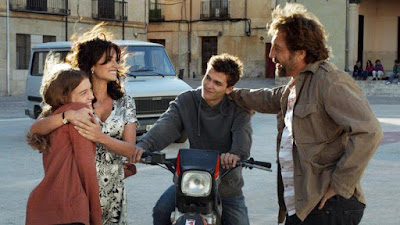 What a strange thing it is to see a bride and groom launching their lives together and not smile. Yet here is an entire village, gazing upon wedded bliss and offering little but blank faces -- a few scowls, even.

That's an early scene in "Everybody Knows," a family drama/thriller set in a provincial town outside Madrid. Penelope Cruz plays Laura, who left her home decades ago to marry and live in Argentina. Javier Bardem is Paco, her old flame who now runs a vineyard on land her family used to own.

Laura's sister (Inma Cuesta) holds her wedding in the village church, the sort of idyllic scene we've glimpsed in a thousand movies -- the couple having rice thrown at them, everybody crying and cheering, a spectacle of pure joy. Yet writer/director Asghar Farhadi points his camera away to the townsfolk, who are not happy to witness this.

Ostensibly the story is about a kidnapping as Laura's teen daughter, Irene (Carla Campra), disappears from her bed after the reception. But really the film is about the tension rife within this seemingly idyllic place -- the secrets, the resentments, the hidden motivations that everyone seems to bear.

Farhadi ("The Salesman") uses the crime as the springboard to an exploration of this family and community. It's the sort of place where people embrace life exuberantly, drinking and dancing in abandon. Yet there's layer upon layer of rot underneath, and all it takes is one event like this to expose the maggot-infested core.

Allies become suspects, the truth is twisted and leveraged, and eventually we reach a point of total paranoia. Virtually any character in the story could be behind the kidnapping.

There is much curiosity about the absence of Laura's husband, Alejandro (Ricardo Darín), who stayed behind for work. He is known as a well-to-do businessman who made a sizeable donation to the church for repairs some years back. The local priest actually pauses the wedding ceremony to praise his generosity -- while musing if there couldn't be more forthcoming.

It seems this sentiment is decidedly non-secular, too.

The patriarch of the clan was once virtually the lord of this village, but he lost his riches due to drink and gambling, yet still thinks everyone should defer to him. Laura's older sister and her husband are very involved in the search, but they run a hotel that's barely paying enough to cover the loan. The list goes on.

The brother-in-law brings in a retired police detective friend to help, and soon fingers are being pointed all around.

Paco appears very happy with his wife, Bea (Bárbara Lennie), yet it seems clear to everyone that there's still something between he and Laura. When Alejandro finally shows up, his behavior creates new presumptions while dashing existing ones.

This is a very smart film, yet we never feel like we're being played for suckers. Farhadi nudges us rather than manipulates. The movie seems less interested in resolving what happens to Irene than seeing how her disappearance causes all the adults to reexamine the comfortable lives they've fallen into.

Gripping and yet very human, "Everybody Knows" is a whodunit that cares more about the how and why.

Posted by Christopher Lloyd at 11:54 PM